“Show hospitality to one another without grumbling.” – 1 Peter 4:9

I did meet the Queen and it was an event of unforgettable hospitality.

National Hero The Right Excellent Sir Hugh Worrell Springer and his wife Dorothy Lady Springer (Aunt Dolly) invited my wife Kean, myself, Adrian Clarke (Aunt Dolly’s nephew) and Claudette (his wife) to a private dinner with the Queen and Prince Philip at Government House, Barbados when Uncle Hugh was Governor General of Barbados (1984-1990).

Another event of unforgettable hospitality was a Commonwealth Partnership of Technology Management (CPTM) international dialogue held in Kasane, Botswana in 1996.

Over 200 people were invited to the dialogue but there were not enough hotel rooms in rural Kasane to accommodate everyone.

The CPTM set about to solve the problem. The solution? Army tents from South Africa were pitched on recently cleared land.

My “hotel room” was an army tent, a room with a difference. This was a rustic experience.

The bed was traditional; there was an IDD telephone on my carved bedside table; the wardrobe was a horizontal wooden bar mounted between two vertical wooden forks; my suitcases doubled as dressing table drawers; there was electricity supply and running water; the shower was open air with acceptable privacy protection and drainage; a mirror was mounted against the fence and was adequate to accommodate shaving and vanity demands; the water was heated by an independent solar water heater; neither wild fauna nor bugs was a threat; an appropriate technology toilet was installed; there was no AC in the tent but I do not recall being inconvenienced during the four-day stay; meals and the meetings were at a central tented facility; there was no television.  The dialogue proceeded apace.

I visited Japan in 2006 and as I disembarked the plane, I asked myself “why am I being treated by the airline like a special guest?” Then, I quickly realized that each passenger was being made to feel welcome in the same way.

Fast forward to my departure: I turned up early to check-in as is my wont. There was no one at the counter, so I double checked and I was at the correct counter. Precisely at the time advised that the counter would be available for check-in, a platoon of agents emerged in military style, chanted what sounded like a short group prayer and warmly welcomed and efficiently processed the passengers assembled.

The moral of the story? A little training and self-discipline go a long way.

Dr. Noel Brown, an accomplished international civil servant from Jamaica, and I were invited to Tokyo, Japan by the RUM Alliance (Re-Use Motorization Alliance) and the United Nations Environmental Programme to the first automobile recycling meeting to discuss means to solve the challenging issue of the appropriate disposal of end-of-life vehicles on a global scale.

We were panellists at the meeting and afterwards were invited on a guided tour of an automobile recycling plant by the owner.  This was another event of unforgettable hospitality.

End-of-life vehicles are presented for stripping – oil, gas, engine, seats, windscreens, windows, doors etc. Then the chassis is fed into a massive metal crusher for recycling.

Fluids are used or disposed of and reusable parts are sorted, classified, stored, digitally recorded, ordered by customers around the globe, shipped and delivered. This is big business.

The end-of-life vehicle problem is still an environmental challenge in the Caribbean but it is also a business opportunity.

The moral of the story? End-of-life vehicle recycling is a boon to the economy and environment.

Underpinning all of this is hospitality. It matters because it deepens existing relationships and feeds the most basic human need that we all have, to feel loved and accepted. 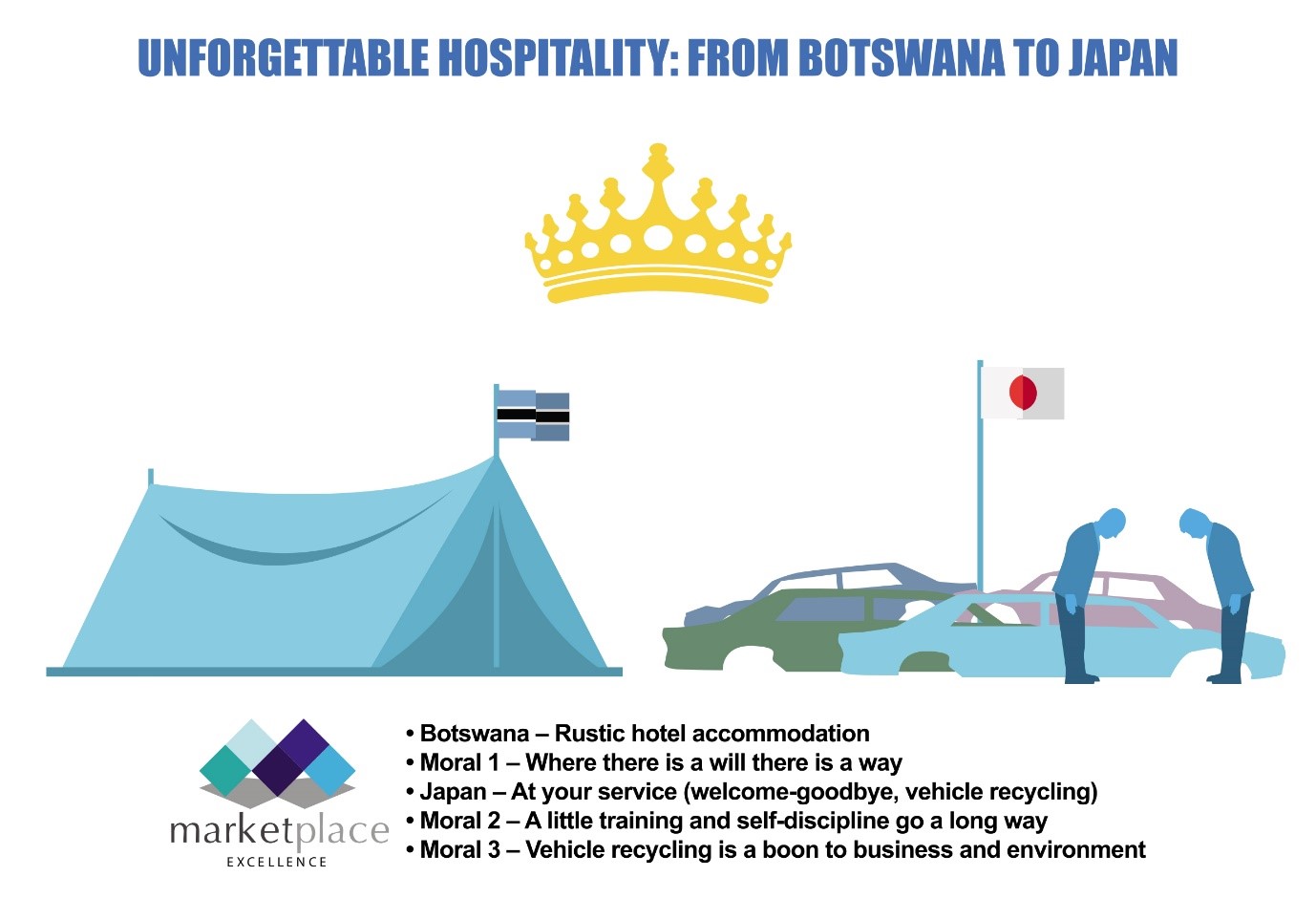