“My flesh and my heart may fail, but God is the strength of my heart and my portion forever.” – Psalm 73:26

David Anthony Jerome Holford passed away on Monday, May 30. He has been deservingly revered as a cricketing legend. The Prime Minister of Barbados has praised him as “a true gentleman of the game”.

I was aware, for some time, that David was not well but I have not been in touch with his family. On hearing the news of his passing on social media, I immediately flashed back to many memories of our childhood and early adulthood.

We first met in first form at Harrison College, Barbados in 1951 when he was known as Tony. The name David stuck when the press adopted his first name as he rose in cricketing fame.

We were in the same class until the fifth form when he went into Science and I into Maths.

Tony was diligent at and focused on whatever he attempted. He was awarded an Armstrong scholarship to UWI, St. Augustine to study agriculture with the likes of Barbadian Richard (Lowdown) Hoad, a dairy farmer, and fellow cricketer the late Trinidadian Dr. Selwyn Griffith, who was a soil scientist at UWI and specialized in cricket pitch preparation.

The many memories began in the pre-teen years when many of us would go to school early and pitch marbles until the bell rang to start morning assembly in the school hall.

Then in later years, we played cricket in the gully behind the dilapidated Kingston great house, a remnant of the plantation economy, bordering on the old train line at the foot of My Lords Hill.

I remember vividly that the late Sir Conrad Hunte (who was eight to nine years our senior) would join us on occasions. From those early beginnings, David exhibited an exquisite ondriving technique to match the flair and power of Conrad on the offside. His late cuts, probably inspired by the late Sir Frank Worrell, and his leg spin and googly bowling followed later.

David, who was 13 months older than me, left school in 1959 to work at the Ministry of Agriculture and played cricket for Spartan. I remained at school for another year to enhance my chances of getting a scholarship to UWI, Mona in Jamaica.

I recall a First Division match, Harrison College vs Spartan. Wesley Hall ran in to bowl to me, while shivering in my boots. The ball was pitched up, so I found the confidence to hit Wes through the covers for four. Tony was in the slip cordon from which there was an instant refrain “Basil, you shunna do dat boy!” Needless to say the next ball went sizzling past my chin, and only the agility of youth allowed me to escape.

I played against David in the UWI inter-campus cricket competition where he observed that my bowling had developed to the extent there was now a some outward movement off the pitch. I was encouraged.

We lost touch for a number of years when I was a student in England but met briefly on his visit with the West Indies team in 1966. He kindly gave me tickets to the second test at Lord’s Cricket Ground. The rest is history … Holford made 105 not out in a magnificent game-saving partnership with his cousin Sir Garfield Sobers.

My son Kevin, and David’s son Marc, whom Kevin knows as ‘Tony’, have a common interest as airline captains.

I extend sincerest condolences to his wife Marva, Marc and his family.

May he rest in peace! 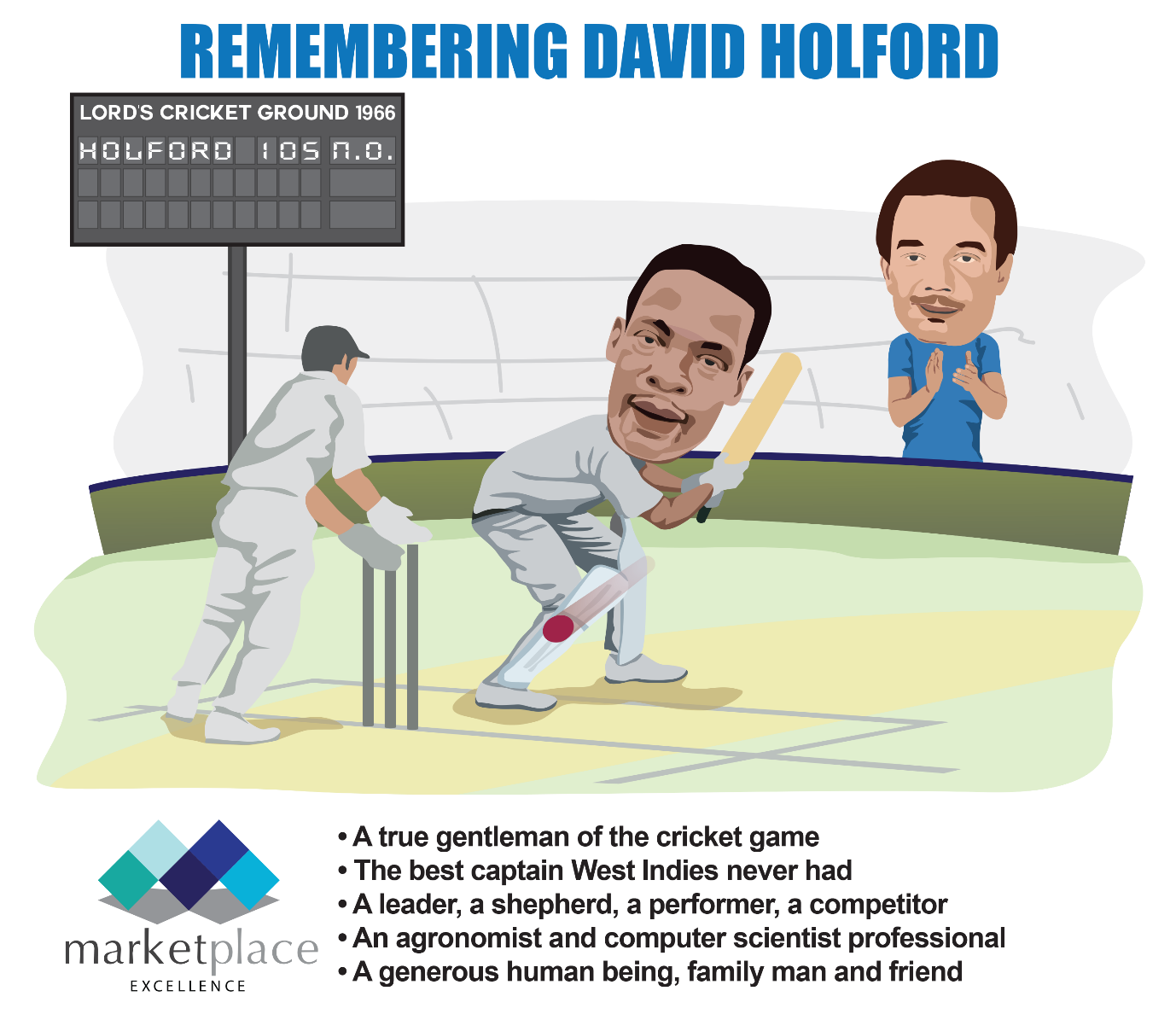