“Behold, how good and how pleasant it is for brothers to dwell together in unity!” – Psalm 133:1

In the last Barbados general election on May 24, 2018, the voting public gave its government a comprehensive mandate to reverse the economic trend.

Her Excellency Dame Sandra Mason, Governor General, in the throne speech at the state opening of parliament on Tuesday, June 5, 2018, stated: “At sunrise on May 25, the people of Barbados welcomed a new day and a new government with renewed optimism and hope. It is in these historic chambers of the third oldest parliament of the Commonwealth that the men and women elected must join with those nominated, to transform that hope into reality and a bright future for a country and a people, bruised but not broken – a people, who now stand ready to join hands and work at building the best Barbados together.”

The Barbados Today editorial of February 4, 2019, suggested a Marshall Plan for Barbados. This was with reference to the 1947 Marshall Plan which was a U.S.-sponsored programme implemented following World War II to aid European countries that had been destroyed as a result of the war. It was laid out by U.S. Secretary of State George Marshall during an address at Harvard University in 1947. The plan was authorized by the U.S. Congress as the European Recovery Program (ERP).

Even though Caribbean economies have not yet been directly destroyed by a world war, I have concluded that the economies are in crisis and there is a need for rich countries to respond with a “Marshall Plan for the Caribbean”.

I think that the Barbados Prime Minster Mia Mottley is ideally positioned, as leader of the structured Barbados Economic Recovery and Transformation (BERT) plan and in her capacity as lead CARICOM (Caribbean Community) head responsible for the single market and economy (including monetary union), to be the architect of a Mia Mottley plan for the Caribbean.

Indeed, it was reported that in addressing the two-day CARICOM inter-sessional meeting that was held in St. Kitts last week, PM Mottley warned that the future of multilateralism is being threatened at the very time it is needed more than ever and urged Caribbean Community countries to put aside their differences and further develop the much heralded CARICOM Single Market and Economy (CSME) which allows for the free movement of goods, skills, labour and services across the 15-member bloc.

Following the decline of the Barbados economy, the BERT plan has to date successfully focused on structural adjustment and reduction in government expenditures in tandem with support from the IMF and regional and international partner organizations. Now the focus must be on national economic growth.

Since December 31, 2018, in this column, we have been mainly looking at balance and synergy in Caribbean partnership and discussing the myriad opportunities for growth in the Caribbean. But alas, the longest journey begins with the first step.

Let us as brothers and sisters dwell together in unity and help implement the actions of a Mia Mottley plan for the Caribbean. 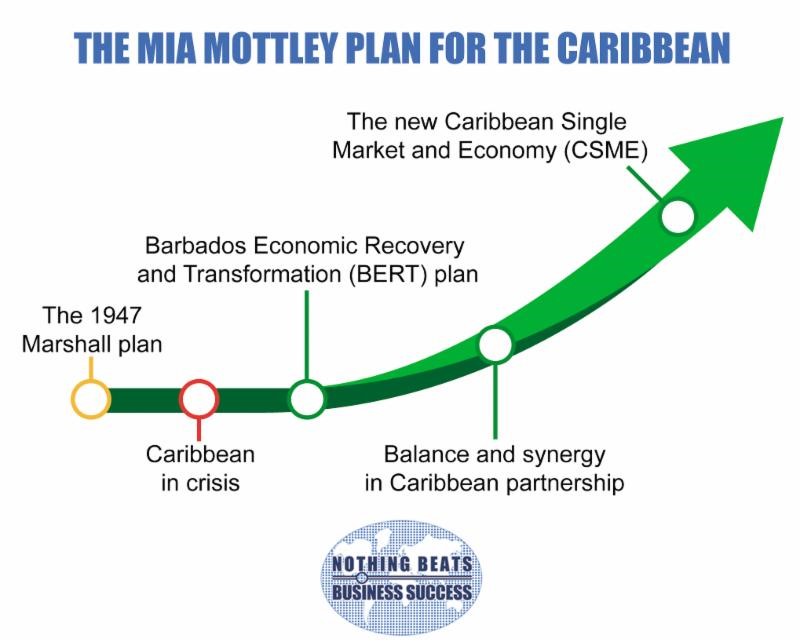