“Other seed fell into good soil and brought forth grain, growing up and increasing and yielding thirty and sixty and a hundredfold.” – Mark 4:8

Thirty years ago, it was apparent that entrepreneurial activity had been enhanced, both in Silicon Valley and in Boston, by the growth of the venture capital market. I set out on a tour of Boston in search of venture capital knowledge which I thought could contribute to the growth of economies in small states and emerging nations in the Caribbean.

Specifically, my question at that time was, as it is now, how do we source profitable private sector investment to finance entrepreneurs, i.e. persons who start their own business with a new idea, concept or innovation?

I returned to Barbados “bright-eyed and bushy-tailed” all ready to make something happen. I mounted a workshop to present my findings of the tour and, even though many people attended, there was little private sector interest in establishing a local venture capital fund.

There were two interesting responses to my presentation. The one from Sir Courtney Blackman, the Governor of the Central Bank of Barbados at the time, and the other from the late Sir Douglas Lynch who was the then Chairman of Barbados Shipping and Trading Co. Ltd. (BS&T – now part of the Massy Group).

The Governor proposed that the reserve requirement of commercial banks, lodged at the Central Bank, could be reduced and the difference used to capitalize a venture capital fund to stimulate Entrepreneurship. Indeed, the concept of Shepherding (value chain coordination, mind-set change, business skill set change and cross cultural communication change) as a risk mitigation measure, which is gaining traction today, had not yet been formally introduced. The Governor’s concept never saw the light of day.

The other interesting response from BS&T actually resulted in the introduction of Intrapreneurship, i.e. an employee who promotes innovation within the limits of his or her organization. The BS&T directors provided a sum of money to encourage internal entrepreneurs to come up with new ideas for the benefit of their company.

It was not until 2009, when the then Prime Minister the late David Thompson successfully launched the Barbados Entrepreneurs’ Quick Response Venture Capital Fund at George Washington House in the historic surroundings of the Garrison, that some progress was made. Unfortunately, the Honourable Prime Minister fell ill within months of the launch and soon after passed away. The private sector sourced venture capital fund concept, with government incentives, died with him.

Just over a week ago, while chatting informally with a captain of industry in Trinidad at a social function, I piqued his interest by contrasting Intrapreneurship, which his group of companies also practised, with Entrepreneurship.

My view is that whereas Intrapreneurship certainly grows the economy by making big businesses bigger, it frustrates the reduction of the wealth divide by restricting business ownership in the hands of a few, whereas Entrepreneurship gives the individual with a new idea the opportunity of becoming a big business in his or her own right and hence grows the economy as well as reduces the wealth divide.

My hypothesis is that Intrapreneurship and Entrepreneurship together give a small country a better chance of accessing the global market, leading to the sustainability of economic growth.

In the Intrapreneuship model, the innovator within the organization will get a salary and may participate in an employee stock ownership plan. He or she may grow within a relatively risk free business environment. Whereas in the Entrepreneurship model, with “Shepherding as Collateral”, the innovator will get a salary and will usually have significant ownership in his or her company thus ultimately mitigating the wealth divide. 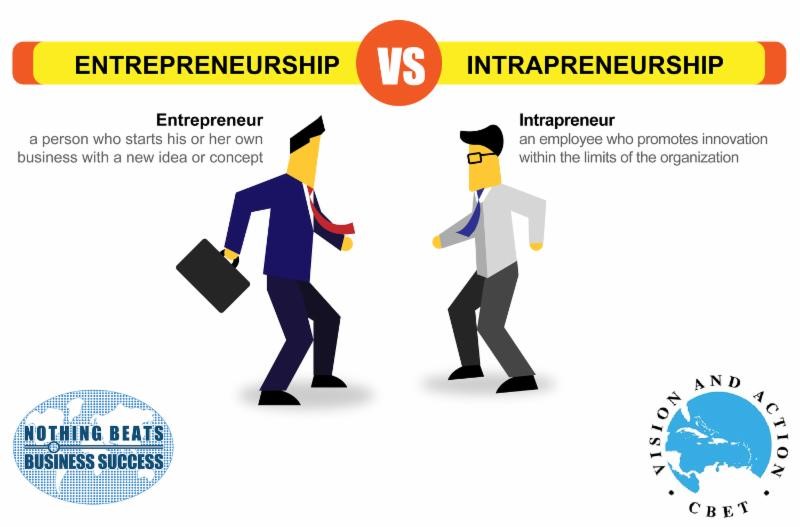 Let us now grow the seeds of Intrapreneurship and Entrepreneurship so they may be nurtured by the Light of God and yield a bountiful harvest of economic growth.