Many years ago, I was asked by a regular reader of my column “when you sit down to write your column every week which comes first the biblical verse, the story you want to tell or the title of your column?” I probably said then that it might be either. Now I would say that I start with the content and the biblical quote and title follow.

It is a challenge, but I have done it every week for over 29 years and there is no reason why I should not continue, deo volente.

When I sat down to write this column, I was inspired to share some awesome hospitality and dining stories which I have experienced over the years. A colleague said to me, but that would take you several weeks. He was right. Please join me as I go randomly down memory lane.

On one of our regular annual trips to visit my aunt (who worked for the United Nations) and her family in New York, we went out to dinner at a restaurant on the Long Island Sound. Lobster was the specialty at the restaurant. We were allowed to select the live lobster from the tank and ordered the dish lobster thermidor.

The waitress advised us that it would take some time to prepare and cleverly introduced us to a variety of hors d’oeuvres available on the lazy susan turntable.

We started chatting, got stuck into the delicious rotating appetizers partnered by regular refills of our beer glasses. We were having a wonderful time but sooner rather than later I began to snooze to the extent that I was about to suggest that it was time to leave.

I was reminded that the main course is yet to come. We left several hours later nursing and savoring the lobster and continued the superb evening.

Moral of the story: Do not be distracted by lazy susans.

In the mid-70s, I visited Geneva, Switzerland for the first time – hosted by my godmother who was based there at the time. After showing me around Geneva, a city of pristine cleanliness, she kindly invited me and some other friends on a mini adventure by bus from Geneva to Chamonix, France and Courmayeur, Italy – towns at either end of the Mont Blanc tunnel.

This tunnel is a major Alpine automotive connecting France and Italy and crosses under the highest mountain in Europe, Mont Blanc in the Alps.

The unaccustomed mountainous scenery in Chamonix and Courmayeur was beautiful and the towns unbelievably charming. Even though they are so close, each town provides an entirely different but delicious culinary experience. From Alpine classics in Chamonix, to classic Italian Courmayeur.

We lunched in Courmayeur in the open air and indulged in a full Italian menu: Antipasti (appetizers), Primi (carb-based from pasta to rice and even soup); Secondi (meat or fish); Contorni (veggies); Dolci (gelato and tiramisu); and Bevande (digestivo or other liquor along with dessert).
Moral of the story: Keep in good grace with friends and family all over the world.

As the late French chef Auguste Escoffier once quipped: “Good food is the foundation of genuine happiness.”
And as we create happy culinary memories across the Caribbean and the world over, let’s partake with a grateful heart and all for the glory of God. 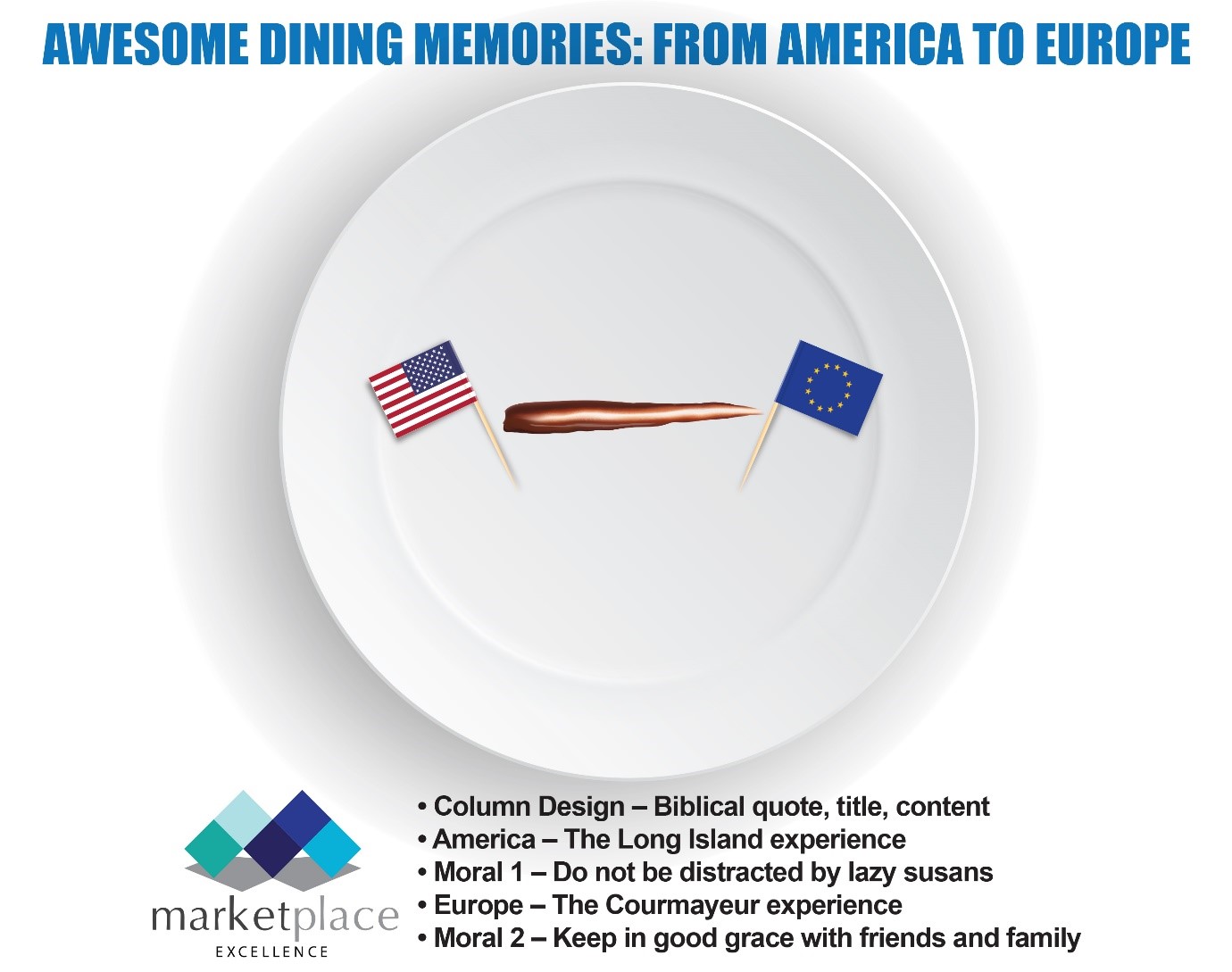