“Train up a child in the way he should go; even when he is old he will not depart from it.” – Proverbs 22:6

Over the past several years various commentators have been repeatedly saying that because of a declining birth rate, Barbados’ population deficit is 80,000 (nearly 30% of the existing population). Barbados needs to fix its “population issues” to have more young people working to support the island’s economic system.

If nothing is done, this could have serious implications for the (1) quality of life of our citizens; (2) stability of our country’s revenues; (3) sustained economic growth; (4) pension reform; and (5) social security scheme.

Prime Minister Mia Mottley recently pointed out that addressing the question of how to increase Barbados’ population will be critical to achieving the kind of workforce balance the island requires.

When demographers attempt to forecast changes in the size of a population, they typically focus on four main factors: fertility rates, mortality rates, the initial age profile of the population, and migration.

Increasing birth rate is a family matter and is unlikely to be popular in our present socioeconomic climate. Public health education has resulted in people living longer.
The age profile is what it is. This leaves us with migration to solve the problem.

Three months ago, PM Mottley announced that a major overhaul of the country’s immigration policy is on the cards, ostensibly to redress this population deficit by importing foreigners commensurate with the workforce balance.

Many countries, including the U.K., U.S., Canada, Singapore and the United Arab Emirates for example, have successfully introduced immigration policies to attract foreign resources with positive results. There should therefore be no shortage of ideas to inform this new dispensation.

The immigration of individuals to judiciously augment the workforce is expected to boost the island’s economy, which was severely undermined by the COVID-19 pandemic over the past two years.

However, immigration of the order of 80,000 persons will include children and this will also create a commensurate demand for primary and secondary education places in schools. We have already seen this with the popularity of the Barbados Welcome Stamp programme.

It is in this context that it was a major shock to hear that the Ursuline Convent was closing. The school advised the Ministry of Education on May 19, 2022 that the Ursuline sisters will end teaching in Barbados by August 2023 because the business was no longer financially viable. No new students will be admitted for the September 2022 term.

Rather than closing schools we should be increasing the number of spots available at the primary and secondary levels to lay a sound foundation for our children as they prepare to enter the workforce.

I shall pause for a moment to say thanks to the Ursuline sisters for the wonderful contribution to the Barbados educational system after 128 years of service.

Ursuline Convent was my alma mater. We were not Roman Catholics but my sister (1948) and I (1945) were privileged to enter this school. It was a great selection by our parents and I often reflect on the comprehensive nature of the education as we were prepared for secondary education at Queen’s College and Harrison College, respectively.

It was also the first school that my children went to around ages nine, six, and two and a half, when we relocated from Trinidad in 1974.

The location, the physical plant, the grounds, the teachers, the teaching materials, the private sector, the Diaspora … these are each important pillars upon which to vision the future.

As the population of Barbados inevitably increases, we must advance plans for new schools and more educators, and in so doing increase the knowledge, understanding and wisdom of our young people.

Investing in their future begins today. 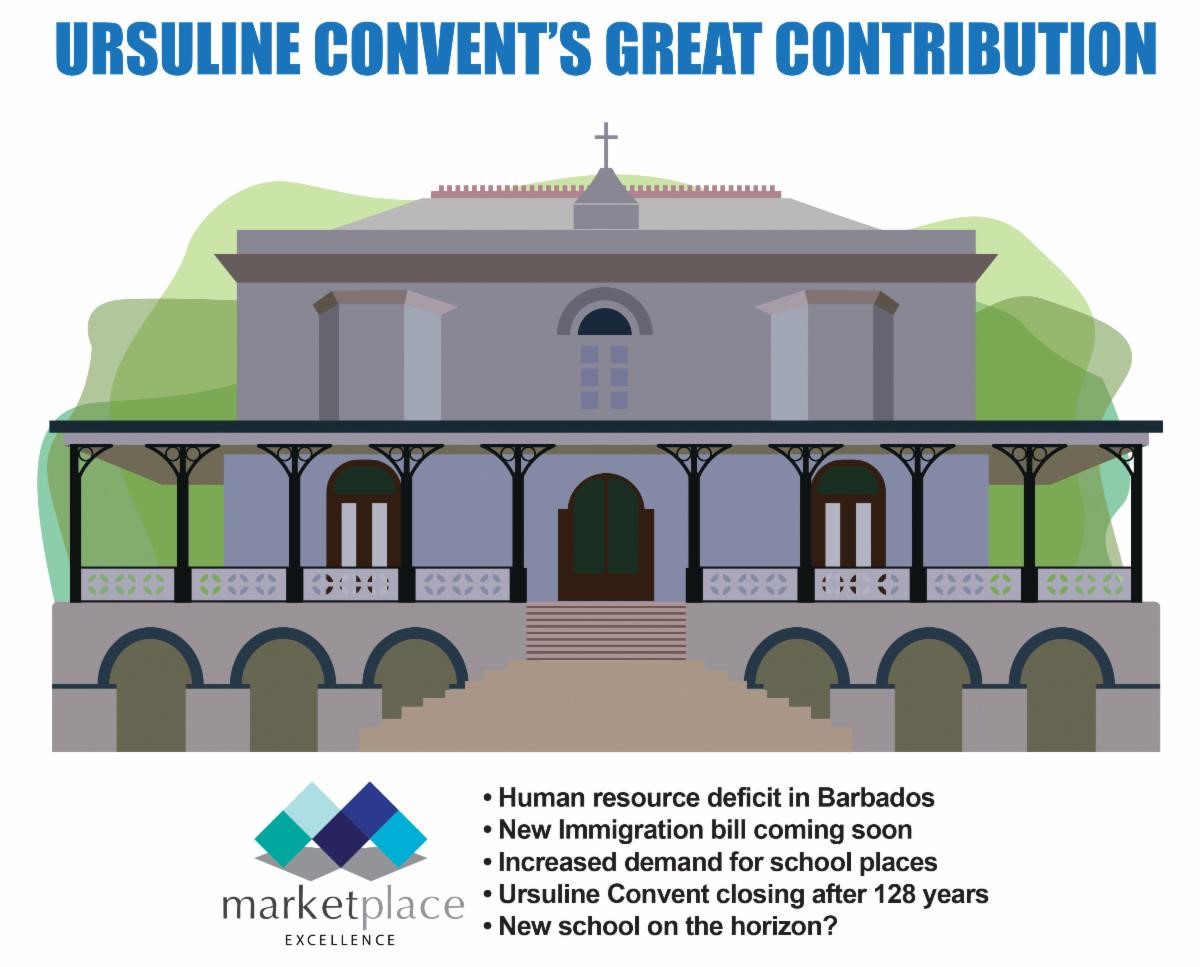