The snap election in Barbados is now history. Notwithstanding many issues which were raised to postpone the election, the people have spoken.

We must (1) congratulate Prime Minister Mia Mottley and the Barbados Labour Party (BLP); (2) urge the dynamic and charismatic Mia Mottley to become the leader of a larger more viable Caribbean; (3) use Mia’s international image and popularity to garner support and raise funds for Caribbean development; (4) nurture new leaders of the BLP and the Democratic Labour Party (DLP) to build a strong parliamentary democracy; and (5) train young Caribbean talent to systematically build strong political parties by adapting existing international training programs.

Congratulations to the BLP on their massive 30-0 victory, twice in less than four years, thus extending their mandate until at least 2027. This victory is no surprise to me. I previously wrote that a snap election was a brilliant move because it was going to take some magic from the DLP to energize a wave (swing) to begin to systematically topple BLP seats won in the last election.

The DLP must now rebuild to achieve a semblance of parliamentary democracy by the time the next election is called.

In this column, on November 15, 2021, I shared my view that Mia is a brilliant, outstanding, exemplary Caribbean leader “who cares”, the likes of which is a once-in-a-lifetime experience.

I stated recently on Irwine Clare’s IRIE JAM RADIO show in New York that “she is fearless and forceful and often quotes The Right Excellent Errol Walton Barrow, the first Prime Minister of Barbados: ‘We’ll be friends of all (and) satellites of none.’” The world is her oyster.

What if we could design a model as to how Mia’s intellect and charisma could be used to mobilize the talents of the wider Caribbean in their best interests?

In the Irwine Clare interview we discussed the impact of her international image at COP26 in Glasgow at which she eruditely and comprehensively analyzed the issues and made succinct proposals for addressing the funding required to address climate change. At that meeting she charged that if immediate action were not taken it would accelerate the demise of the most vulnerable states, including the Caribbean. Can this thrust not be extended to garner funds for regional development?

Mia hinted in her victory speech on the morning of Thursday, January 20 that she entered politics in Barbados over 30 years ago and that this election victory could signal the beginning of her last term in party politics.

It is a stressful business, if you take it seriously, especially if there is no godparenting country to provide a safety net in the event of a natural disaster. She will be 61 years old at the end of this term (Deo volente) and must be often reminded of the life span of her predecessors David Thompson (48), Tom Adams (53) and Errol Barrow (67) who each died in office well before the expected three score and ten.

She would be best advised to select a successor and nurture him or her to take over whether or not she opts for a regional assignment in a non-party political space.

The DLP has been decimated and must find a young leader around which to rebuild.
Political parties are at the core of our democracy, and we must systematically engage in skill set change, mindset change and cross-cultural communication change, if we are to build strong political institutions around the Caribbean. We should not ignore training modules already developed elsewhere to train parties in internal democracy, communications, governance and transparency. 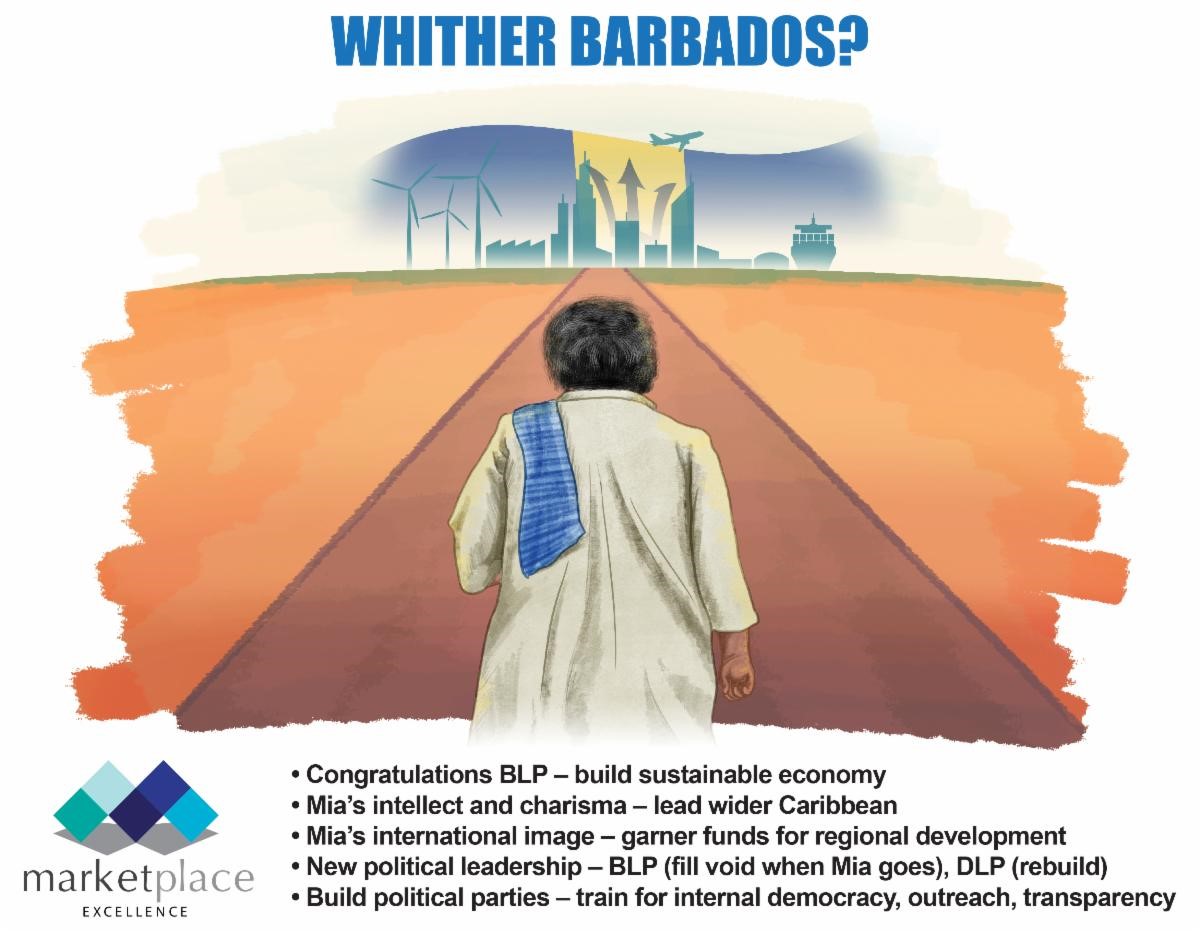