Lee Quan Yew (1923 to 2015) co-founded the People’s Action Party (PAP) in 1954, won a seat in 1955, and became the Opposition Leader. In 1959, his party swept all 51 seats in the legislature and Lee Quan Yew became the Prime Minister of Singapore continuously until 1990. In the 2020 election, where voting was mandatory for all Singaporeans who were aged 21 or above, the PAP secured its 15th consecutive term in government, winning 83 out of 91 seats.

Singapore has been described as a benevolent dictatorship which is in itself food for thought.

The advent of the PAP has significantly influenced Singapore’s impressive statistics as the country with the highest ranking on the Human Development Index among Asian countries, the second highest GDP per capita in the world, one of the safest and least corrupt nations globally.

The economies of Barbados, Jamaica and Trinidad and Tobago were ahead of Singapore in 1959. All four countries became independent from British colonial rule in the 1960s but Singapore, which grew by an average of six percent per year, was economically ahead of the pack by 1970. The rest is history.

I have monitored Singapore’s progress continually since my first visit (in transit) in 1982. In 1993, I returned from Singapore all fired up and wrote an article to the press entitled “Barbados – the Singapore of the Caribbean”. The late Sir John Stanley Goddard, an eminent Barbadian and Caribbean businessman, called me up and asked me to continue the story in the press. This was the genesis of the weekly BASIL SPRINGER COLUMN, which starts its 29th consecutive year on July 1, 2021, deo volente.

In 1999, I visited the Singapore Economic Development Board (EDB) to learn some more about the working of the Singapore economy.  On my most recent visit to Singapore in 2007, my son Bevan accompanied me. Dr. Carlisle Boyce, a Barbadian living in Singapore at the time, organised a custom-designed EDB presentation for us entitled “The Singapore Advantage”, which told the economic history from 1959 based on the C.O.R.E. pillars of Connectivity (hub, telecoms, global market access), Openness (living, English-speaking, foreigners welcome, education), Reliability (trust, quality, credibility, low risk), and Enterprise (startups, shepherding, workforce, ease of doing business). Singapore has been an example for Small Island Development States (SIDS).

Prime Minister Mia Amor Mottley was born in 1965. The PM has been a member of parliament since 1994 and has served continuously on the government and opposition benches and as Leader of the Opposition for five years prior to her party’s clean sweep at the polls in 2018. She has been performing with passion; she is persistent in leading the charge to achieve her party’s goals; she is patient as COVID-19 stymied global economic growth; and she has been forthright in spearheading the issue of pivoting the Caribbean as a global leader.

Barbados and the Caribbean SIDS are now at the crossroads in terms of our post-COVID-19 recovery and growth.

I am of the firm belief that if the Caribbean’s leadership learns from Singapore’s success, then our future will be sustained. Why reinvent the wheel? 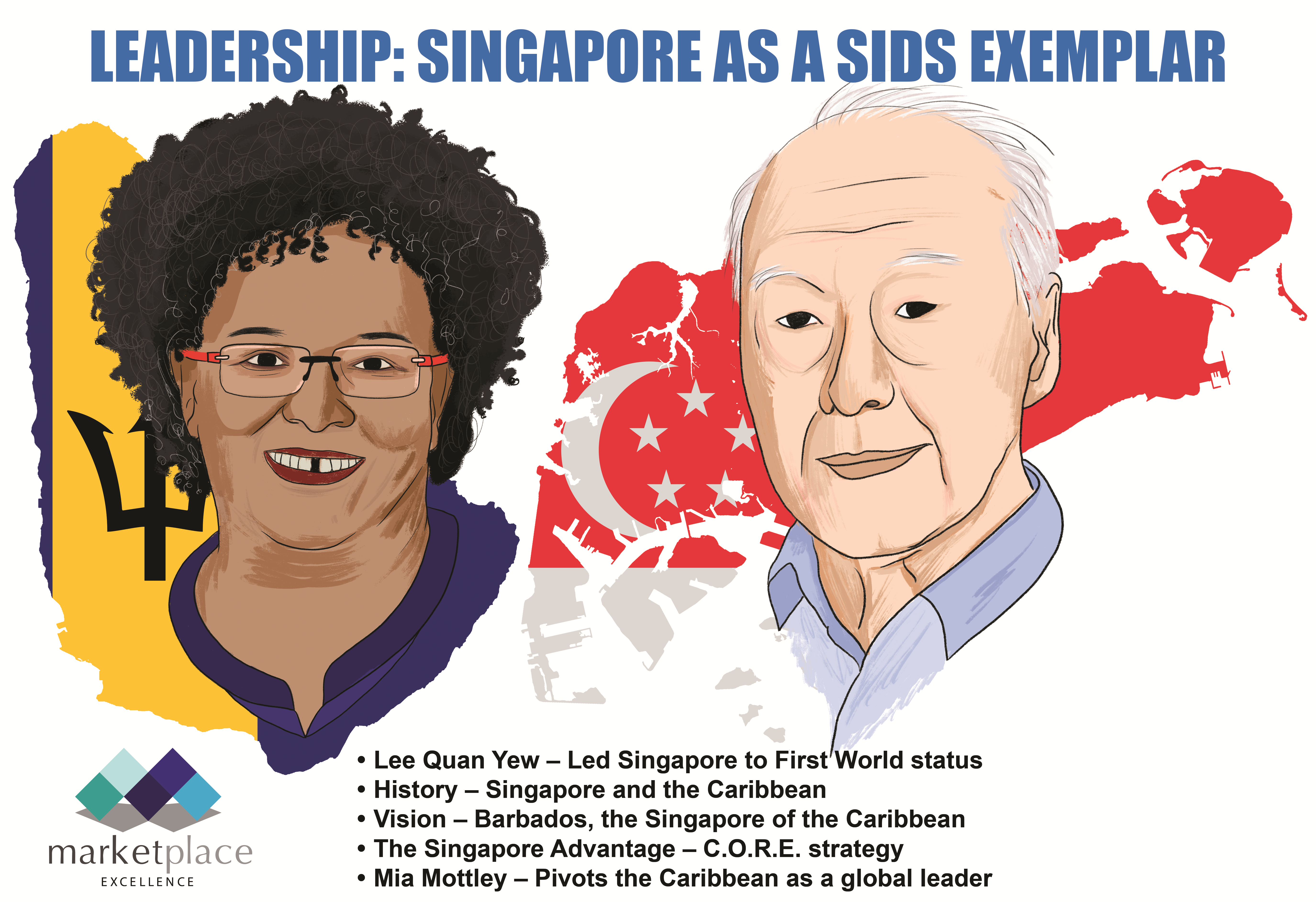 (Dr. Basil Springer GCM is a Change-Engine Consultant. His email address is basilgf@marketplaceexcellence.com. His columns may be found at www.nothingbeatsbusiness.com