“When a foreigner resides among you in your land, do not mistreat them. 34 The foreigner residing among you must be treated as your native-born. Love them as yourself, for you were foreigners in Egypt. I am the LORD your God.” – Leviticus 19:33-34

In the period after the emancipation of slavery, Caribbean people migrated to Panama (in the 19th century), and to the UK, the US and Canada (in the 20th century) in search of work. Their services were in demand and for the most part they were welcomed to the extent that today, after several generations, they collectively number in the millions. This constitutes the Caribbean Diaspora, a powerful force to be reckoned with.

The transition has been challenging, but despite this, the Caribbean Diaspora has become a significant resource of talent and wealth, contributing to the post COVID-19 recovery and growth process, including the development and promotion of life saving vaccines.

In last week’s column, it was proposed that we document the Diaspora talent and transform it into business ideas and learn from others how to convert the ideas into commercial realities to generate wealth.

Two weeks ago, in this column we posed the question “How can CARICOM pivot, using its own resources and talents, and how can we leverage the potential of USVI/CARICOM partnerships to our mutual benefit?” The answer was to focus on (1) structure by establishing a Trust for the mutual benefit of the people of the Caribbean and its Diaspora; (2) financial security by mounting a quick response profitable growth Fund under the Trust to provide financial security for startup business enterprises and Fund investors, including highly skilled Diaspora professionals; (3) communications by embracing public relations, marketing and media savvy personnel from the Diaspora aimed at the generation of revenue which will enable the initiative to hit the ground running; (4) operations which will reverse the global startup business failure rate; and (5) people development to stimulate success and inspire generations yet to come.

Way back, in January 2003, Air Jamaica observed that there were many issues being raised at a town Hall meeting in Brooklyn, which were of great import to the Caribbean Diaspora. They hosted a strategic visioning session which I had the honour to facilitate, which concluded that to soar to greater heights it would be necessary to propose a strategy to systematically address the issues for the mutual benefit of the Diaspora and Caribbean people.

In March 2003, such an institutional framework report was produced, and the Caribbean Diaspora Inc. (CDI) was established, but never implemented. Now is the time for its resuscitation.

Recently, at a forum on the strengthening of US-Caribbean trade and investment relations under the Biden administration, Guyanese-born entrepreneur Felicia Persaud, Chief Executive Officer (CEO), Invest Caribbean, mooted the matter of the US making available to the region, financial assistance to help kickstart the economies in the region.

The above information needs to be reviewed and action taken among the stakeholders to polish the vision of Caribbean Diaspora development and convert it into action.

Remember the adage “Vision without Action is mere fantasy; Action without Vision is folly; neither Vision nor Action wreaks of irresponsibility; Vision and Action induce synergy.” 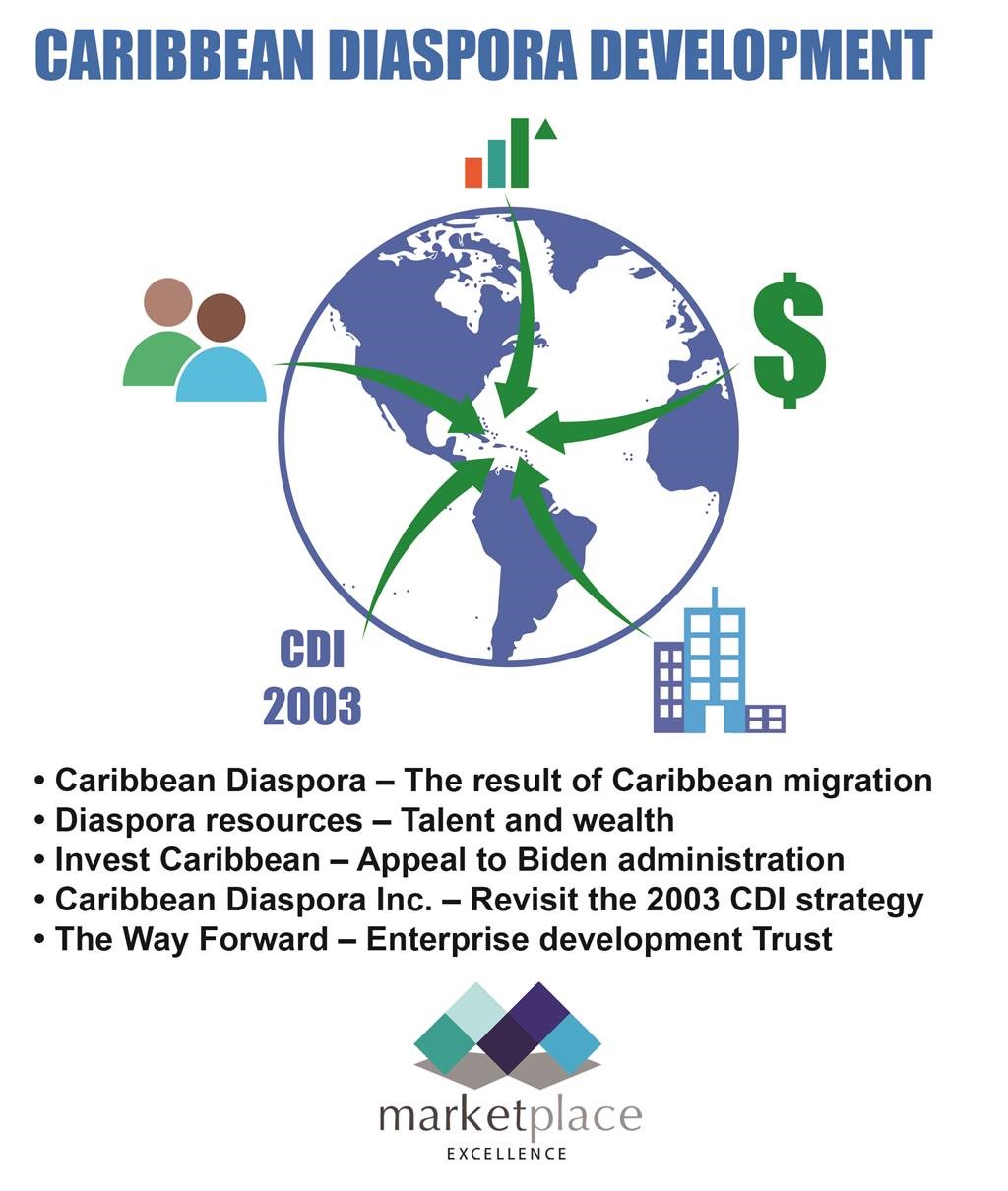 (Dr. Basil Springer GCM is a Change-Engine Consultant. His email address is basilgf@marketplaceexcellence.com. His columns may be found at nothingbeatsbusiness.com.)