HOW CAN THE USVI ENERGIZE CARICOM? – BASIL SPRINGER COLUMN (FEBRUARY 15, 2021)

The Caribbean is a multicultural, multiethnic, multireligious, multilingual region.

The islands of St. Croix, St. John and St. Thomas remained under Danish rule until 1917. They were then purchased by the United States and became the U.S. Virgin Islands (USVI), a territory of the United States.

The majority black population of approximately 110,000 people mirrors that of most of the former British CARICOM countries, blended with a Puerto Rican and Hispanic cultural influence. There are Diasporic linkages on the U.S. mainland and strong family ties between the people of CARICOM, the wider Caribbean, and the people of the USVI.

The U.S. Virgin Islands is part of the Caribbean brand, which constitutes cultural diversity, agricultural history, warm weather, tourism, oil refining, English language, the Blue Economy, soccer, American football, baseball, basketball, and cricket. In many ways, the USVI is a microcosm of the Caribbean as a whole, a veritable melting pot where countless residents of CARICOM countries have made their homes and raised families for generations. It is not at all unusual to meet Vincentians, St. Lucians, Dominicans and many other nationalities living, working or playing in the USVI.

The USVI has its own internal self-government, persons born there are U.S, citizens, its currency is the U.S. dollar, and the Territory benefits from U.S. federal government support programmes. There are few, if any, trade barriers between the USVI and the U.S. mainland as the islands are on U.S. soil.

The USVI pre-COVID-19 Gross Domestic Product per capita is at least double that of CARICOM countries.

In the COVID-19 dispensation, the USVI Department of Tourism and Department of Health implemented a crisis communications protocol to facilitate the seamless and safe travel of tourists from the mainland to the Territory.

Caribbean Journal, a leading digital travel news publication focusing on the region, recognized the USVI as Caribbean Destination of the Year for its continued popularity, an early-2020 campaign to spotlight the island of St. Croix, the swift and agile response to the COVID-19 pandemic and the successful crisis communications protocol.

Compared to the USVI, CARICOM countries are  much more  vulnerable to the lack of access to markets for locally produced goods and services. There is also a paucity of funding for structural adjustment, stabilization and economic growth, which the region needs to produce a better quality of life for their citizens and residents.

So what are the opportunities for mutually beneficial collaboration between the USVI and CARICOM?

The “low hanging fruit” are (1) Education and training – partnerships between the University of the West Indies and the University of the Virgin Islands); (2) Tourism – embracing,  enhancing and benefitting from the work already done by the Caribbean Tourism Organization and the Caribbean Hotel and Tourism Association; (3) Food – mobilizing a Caribbean Food Revolution U.S. market-pull initiative for Caribbean countries to supply products to the U.S. market; (4) Entrepreneurship – rationalization of the various initiatives in CARICOM and the USVI; (5) Cricket – a stronger bond between the USVI cricket authorities and Cricket West Indies; and (6) Oil refining given Guyana is one of the newest petroleum-producing regions in the world.

The way forward to explore how the USVI could energize CARICOM would be to convene a CARICOM-USVI summit based on the tenets of the Commonwealth Partnership for Technology Management smart partnership movement, albeit in a virtual environment.

For those who may think this is a pie-in-the-sky pipe dream, how about one CARICOM country at a time partnering with the USVI in mutually agreed sectors?

Remember that iron sharpens iron, and nothing ventured means nothing gained. Now, those that have ears to hear, let them hear. 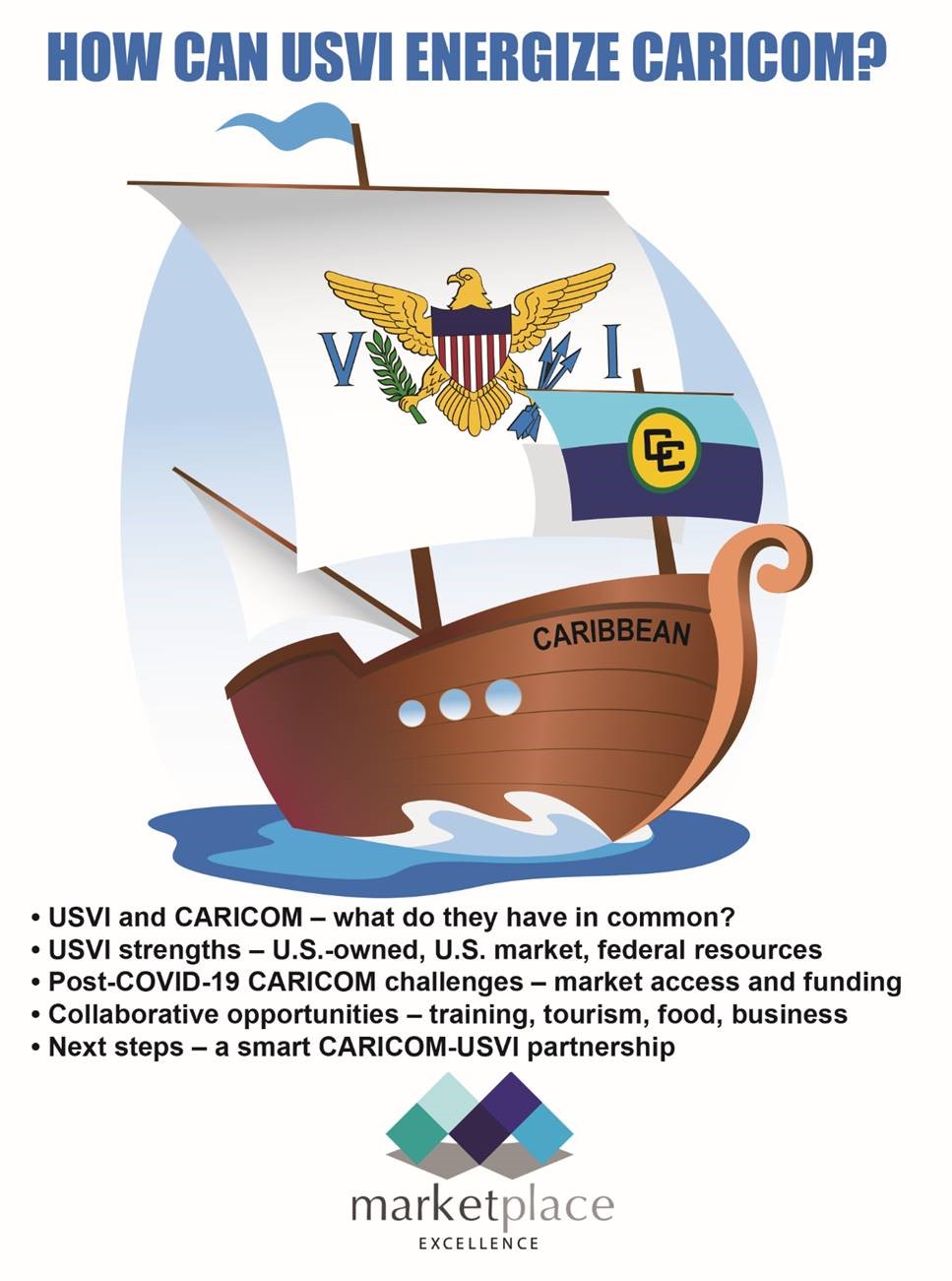 (Dr. Basil Springer GCM is a Change-Engine Consultant. His email address is basilgf@marketplaceexcellence.com. His columns may be found at www.nothingbeatsbusiness.com/basil-springer-column/, www.stluciasimplybeautiful.com on www.facebook.com/basilgf and Barbados Today online newspaper).