“And you will hear of wars and rumours of wars. See that you are not alarmed, for this must take place, but the end is not yet.” – Matthew 24:6

In the past, an act of war was related to economic, territorial, religious, nationalism, revenge, civil, revolutionary and/or defence issues and it would be fought by the armed forces using traditional, including submarine mines, weaponry with a loss of life mainly of young soldiers. If World War III were to start, for whatever reason, it was generally assumed that it would be a nuclear war with an unprecedented loss of life of military and non-military personnel.

COVID-19, an unexpected microscopic virus, depicted with a shape similar to that used for submarine mines, has jumped the species barrier from animals to declare an aggressive war on human life. It is transmitted from person to person. So how do we fight it? Persons must distance themselves one from another to contain the disease. This has resulted in all persons being required to stay at home. The exemptions are those involved in the essential services required to support day-to-day living and to mitigate the rate of death.

Some form of national lockdown or state of emergency has been instituted globally to support this physical distancing process. Some nations have acted faster than others. The tourism and travel industries have literally ground to a halt and international trade has been slowed down considerably. The challenge is to avoid a potential precipitous world economic crash since all nations are impacted by COVID-19. Even tiny Pacific islands cannot escape.

National leaders have stated that our only hope to combat this disease, until a vaccine becomes available, is to be very positive, to pray, to give relief to those who get the disease and rely on their immune systems to fight it off and, above all, to stay at home to reduce the rate of spread. If we can flatten the curve (the distribution of the projected number of people who will contract COVID-19 over a period of time), there is an increased chance of adequately equipping the facilities at the isolation and health care centres and hence reduce the death rate.

China appears to be past the worse and to have the pandemic under control. Its economy is now exhibiting a V-shaped recovery but needs the containment programme in the rest of the world to work so that persons can return to work and the demand for their goods and services can be restored and sustained.

Tourism is the existing and future lifeline for most Caribbean nations, and we are a major importer of many essential goods. Caribbean leaders would like to contain the spread of the virus locally and hope that the economies of our traditional trading partners are back to normal health as soon as possible.

We are faced with an optimization problem, where we must minimize deaths and maximize the opportunity for economic growth within the financial resources at our disposal. If we stay at home for a few weeks we limit the spread of the disease, and if we support our health care providers and heed their advice we shall flatten the curve and minimize deaths. The sooner persons can back to work, the sooner the economy will grow. 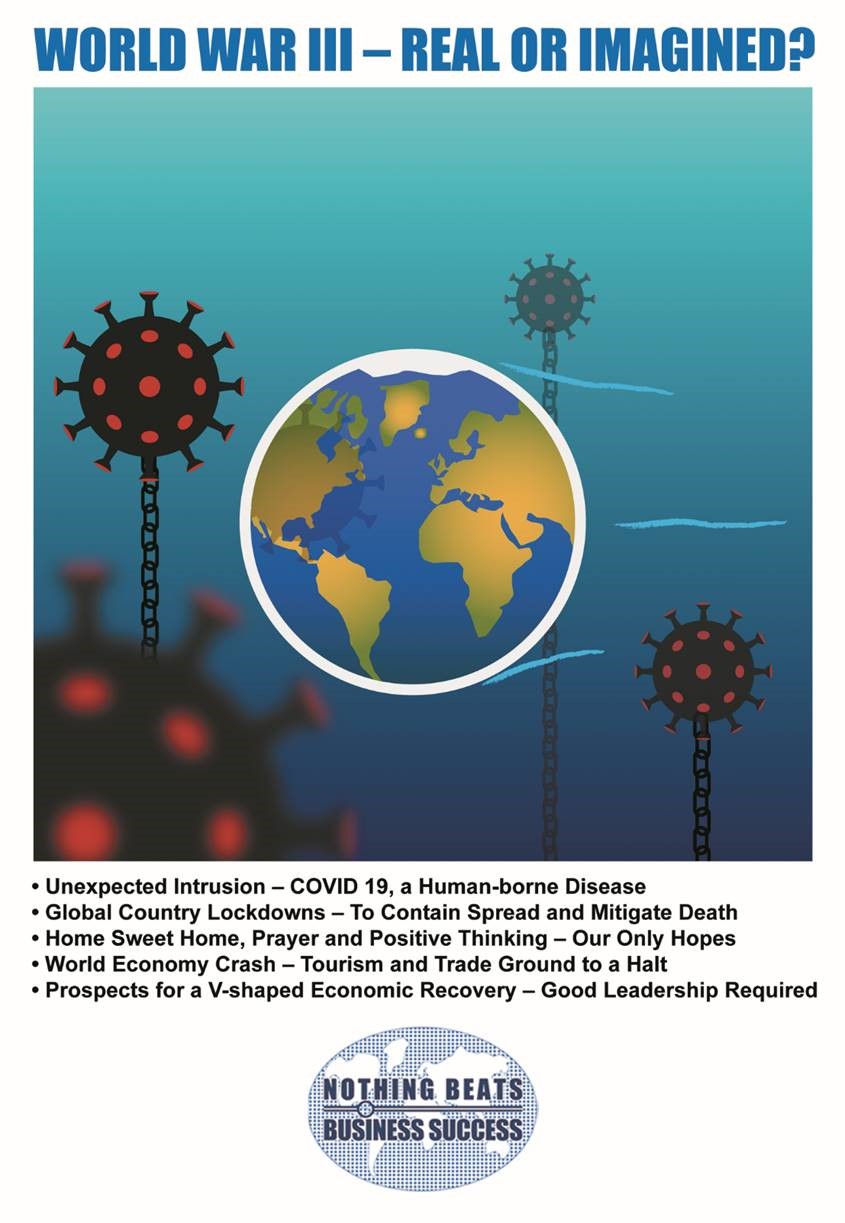 My parents were born at the start of World War I. I was born in the middle of World War II. My children and grandchildren are now faced with the likes of World War III. An unexpected microscopic organism has threatened human life. At present, its person-to-person transmission can only be arrested by physical distancing which is best effected if most of us stay at home. Listen to this message in song by Ugandan musician and politician Bobi Wine: https://www.youtube.com/watch?v=PUHrck2g7Ic.

In the interim, the global workforce has been depleted which may cause the world economy to crash. Massive declines in tourism and trade remind us that we are all one global family network. While China, the origin of this mutating virus, is containing its spread, we are seeing the unfortunate loss of life around the globe, as if we were at war.

Let us hope and pray that good leadership in the Caribbean and abroad will prevail and that the thought of the virus simulating a World War III, is merely a figment of my imagination. Where there is vision, there is hope: http://news.aa.com/news/news-details/2020/CEO-Doug-Parker-On-What-the-CARES-Act-Would-Mean-for-American-OPS-DIS-03/  .

(Dr. Basil Springer GCM is a Change-Engine Consultant. His email address is basilgf57@gmail.com. His columns may be found at www.nothingbeatsbusiness.com and on www.facebook.com/basilgf).