In the quest towards national economic recovery and sustainable economic growth we have so far discussed smart solutions for (1) constitutional reform, (2) public-private partnerships, (3) the political process, (4) decentralized government, (5) innovative taxation, (6) debt restructuring, (7) innovative economic growth, (8) people development and (9) optimal land and marine use. The smart solutions series ends in today’s column with a look at (10) how to curb government net outflow.

The challenge is to optimize benefits to the stakeholders of the country as a whole within the constraints of minimizing the government employee wage bill and minimizing the tax burden on the country’s stakeholders.  The secret is to engage all stakeholders in a social compact from the beginning as the recently elected Prime Minister of Barbados has done within the first month of her stewardship, already resulting in at least a perceived renewal of national, regional and international interest in Barbados.

A central government must focus sharply on creating the appropriate legislation to establish policies leading to harmonious rule of law and obtaining adequate government revenue which may be used to provide central services (e.g. education, health, transportation and housing).

Government is often the largest single employer in a country. The government wage bill is significant and must be continually examined to ensure that it is optimal. In the event that this bill needs to be reduced by laying off individuals that is not the “end of the world” for these employees. There is an option for at least some of these employees to become entrepreneurs and participate in a growing sector of enterprise development. Of course, there is need for the government and the private sector to provide the enabling environment within which entrepreneurs will thrive.

There is often a large number of state-owned corporations which support different sectors of the economy. Each of these statutory corporations should be examined to determine to what extent they can develop their own profit centres and reduce the subvention burden from central government.

The concept of a market-linked economic gearing system for small, medium and large enterprises must be developed to allow us to focus efficiently on accessing the global market which is the ultimate source of wealth for small states and coastal communities.

Finally, the trade unions have to go through a paradigm shift where they shift their focus from collective bargaining to a new philosophy of productivity enhancement for fair compensation. The government needs to support and encourage such a shift in the national interest. 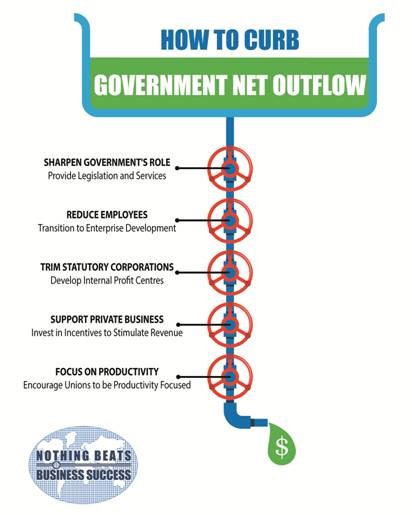 Let us look at the roles of the social partners and optimally divide the share of the burden between government, the private sector and the trade unions in such a way as to achieve overall efficiency while minimizing government outflow.