“And Jesus came and spoke unto them, saying, All power is given unto me in heaven and in earth.” – Matthew 28:18

The Barbados parliament automatically dissolved as determined by the constitution on Monday,  March 5 2018. The long awaited date for general elections is now Thursday, May 24 2018 when eligible persons will cast their votes for all 30 seats in the House of Assembly using a first-past-the-post system. Today is Nomination Day when the slate of candidates will be formally announced. There is expected to be a record number of parties and candidates. Learn more about the candidates from – http://caribbeanelections.com/bb/elections/bb_results_2018.asp .

In this series, we have so far suggested smart solutions for constitutional reform, public private partnerships and today we look at objectives and a sensible smart solution to address glaring anomalies in the existing political process in Barbados and beyond.

Ideally the politician should be person who runs for public office with the primary desire to serve the country, not an individual who sees the office as an opportunity to feed an ego, satisfy an appetite of greed, wield a baton of power and engage in corrupt practices at the expense of the populace.  He should be humble and recognize that the sole source of power rests with the Divine.

The electoral system should focus on fair representation of voters in parliament. The present first-past-the-post system not only suppresses the interest of the best candidates because of its excessively combative approach but also can lead to ridiculous results as we have seen in the recent Grenada elections.   Imagine a political party that gets 40 per cent of the popular vote ending up with no political representation in parliament.

This should be replaced with the proportional representation electoral system where the system for the determining the number of seats held in parliament by a political party is based on the proportion of the votes cast for that political party.  What is worse, this anomaly has been allowed to continue with precious few jurisdictions (example the Republic of Guyana) lifting a finger to correct it.

Political parties are about acquisition and exercising political power. They organize groups of people to form policies which should result in enhancing the socio-economic well being of the populace.  In small states there are not many options for ideological diversification. The objective should be “as the rich get richer, the poor should get richer too.”  Would it not be wonderful if we could devise a system which mobilized the best brains in the country to achieve this objective? Instead of spending a lot of time and financial resources in combative spirit, would it be wonderful if these parties could work together in search of  a smart solution to the problem?

The Swiss political process has achieved this. Singapore has effectively achieved this. Even though they have elections every five years, one Singaporean party has held power since 1959 (it currently has approximately 90 per cent of the seats in parliament). This party invites and encourages innovative views to be discussed and resolved within its boundaries rather than to spend energy opposing when the country has already achieved success. Look at the socio-economic results. There may be small pockets of dissent but the country has grown to be a first world country, from being “a sleepy fishing village with a threat of communism”, in less than 60 years. The proof of the pudding is in the eating. What can we learn from them?

The Smart Solution lies somewhere in the resolution of the paradox that it makes no sense expending effort fighting each other on marginal issues when you could join forces and spend the same total energy on productive issues which can take the country forward. Why the tug of war? 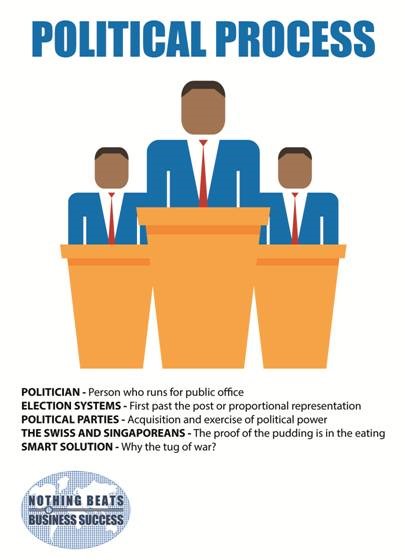 The political system in small states, in particular, is fraught with anomalies about unfair election systems, where power really lies and the best use of available leadership and management resources which are crying out for change.

Let us urge and beseech our politicians to rise above egos, greed, corruption and power and devise a smart solution to serve the general public in a manner which will lead to sustainable development for the benefit of posterity.