“For God makes all the decisions here. God is our king. God runs this place and he’ll keep us safe.” – Isaiah 33:22

If small states are to reverse their declining socio-economic fortunes and pursue a path leading to happiness for all, we must change. As the rich get richer, the poor must get richer too!

National Strategic Leadership is responsible for Vision and the combination of Governance Policy and Management Execution is where the Action takes place.

In this series of columns, constitutional reform is the first of 10 challenges for which we must find a smart solution towards happiness for all.

The constitution of the English Westminster model has been adopted by the small states of the Caribbean community which are all members of the British Commonwealth. We have followed it for many years but is it an optimal model at this stage of our development?

The Governor General or President (where a Republic is preferred) are nominated and serve as symbols of national unity.

The Prime Minister, who should be visionary, is elected as the person who commands support as the political leader of the party that gets the most parliamentary seats in the case of “first past the polls” or, in the case of “proportional representation”, is the political leader of the party which gets the largest percentage of votes in a general election. The Prime Minister then selects the cabinet (ministers of government leading the different portfolios) for the most part from the elected representatives or in the case of “proportional representation” from the slate of candidates presented before the election. We must bear in mind that those who enter the electioneering fray and become elected representatives may not be the best leaders of the country.

In the constitution of the American Presidential system, the President is elected and so are the members of the legislatures representing the various states. In this system, the President nominates the executive arm of Government but the system also vests a lot of its power in its president who may become too powerful.

In Switzerland, there is a feature of collaboration among political parties and it may be argued that this collaborative system is an example of the best use of the country’s available leadership resources.

Singapore is the leading example of a small state which systematically developed from “a sleepy fishing village with a threat of communism” in 1959 to the thriving first world country that it is today, a republic within the British Commonwealth. Singapore has elections every five years and the same party has been in power since 1959. At the last election in 2015, this ruling party contested all 89 seats and won 83. Parties with innovative political agendas are encouraged to air them within the ruling party rather than to set up a new party.

My smart solution for constitutional reform in small Caribbean states is to study the above examples and move towards a republic within the British Commonwealth as the next step onwards from independence from Britain: nominate a President as a symbol of national unity; elect a Prime Minister to lead the country; the PM should nominate the executive arm from the best brains available in the country to govern and manage the country; elect a house of representatives to make laws and decide how money should be spent as well as look after the interests of people at the constituency level; elect a senate with some independent members nominated by the President so that the senate does not become a political rubber stamping body for the house of representatives. 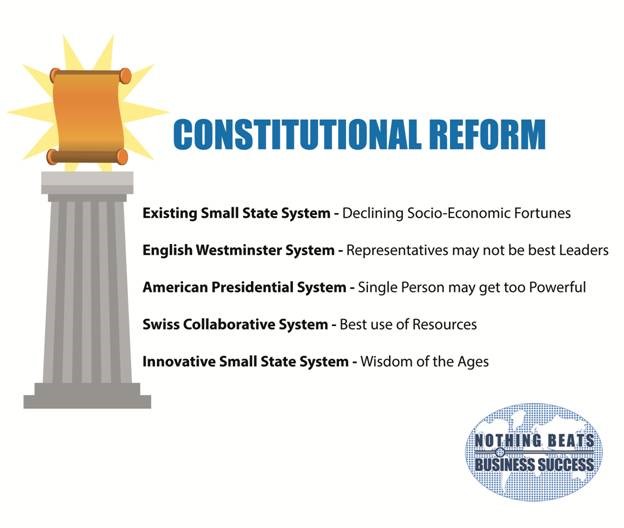 Small states we have inherited a constitution based on our colonial past. We have observed the operations of constitutions in other countries. As we have learnt from the writings of many global philosophers, let us now carefully observe, and analyze the advantages and disadvantages of other constitutions and, with divine guidance, design and implement a constitution for small states which is for the good of all. Let us then accept it and live by it.