“He also took some of the seed of the land and planted it in fertile soil. He placed it beside abundant waters; he set it like a willow. Then it sprouted and became a low, spreading vine with its branches turned toward him, but its roots remained under it”. – Ezekiel 17:5-6

Rotary International President Ian H.S. Riseley from Australia has challenged each of more than 33,000 Rotary clubs in over 200 countries to make a difference by planting 1.2 million trees, one for each Rotarian, before Earth Day on April 22 2018.

Trees remove carbon dioxide and other greenhouse gases from the air, which slows global warming. Trees release oxygen through its leaves which we human beings need to breathe.

At the incoming district governors’ Rotary’s International Assembly in San Diego, California, USA, earlier this year,  Riseley, unveiled the 2017-18 presidential theme “Rotary: Making a Difference”. He stated then that “Environmental degradation and global climate change are serious threats to everyone. They are having a disproportionate impact on those who are most vulnerable, those to whom Rotary has the greatest responsibility, yet environmental issues rarely register on the Rotary agenda”.

He went on to say that “It is my hope that the result of this initiative will be far greater than the environmental benefit that those 1.2 million new trees will bring, I believe the greater result will be a Rotary that recognizes our responsibility not only to the people on our planet, but to the planet itself.”

In the Caribbean, not only are our residents vulnerable to the impact of devastation caused by climate change but we have seen in 2017 what the impact of two successive category 5 hurricanes can do to the tourism industry, the major industry in most Caribbean countries.

In response to the RI President’s challenge, just over a week ago, a group of 8 Rotarians from the Rotary Club of Central Port of Spain, Trinidad, a club or over 40 members and growing, set about to plant 50 trees at the Fondes Amandes Community Reforestation Project (FACRP) in the northern hills of Port of Spain.

FACRP is a community based organization which began in 1982 to fight the dry-season fires that had been ravaging the Fondes Amandes watershed every year. Along with bush-fire fighting, the project began with agro-forestry activities, including the planting of forest and fruit trees and gathering of seeds and other natural materials for making craft. It has grown over the years to become one of the most innovative and successful eco-projects in the Caribbean and is widely recognized as a model of sustainable development in the region.  It was an amazing, exciting and rewarding experience and the project deserves all the support it can get. 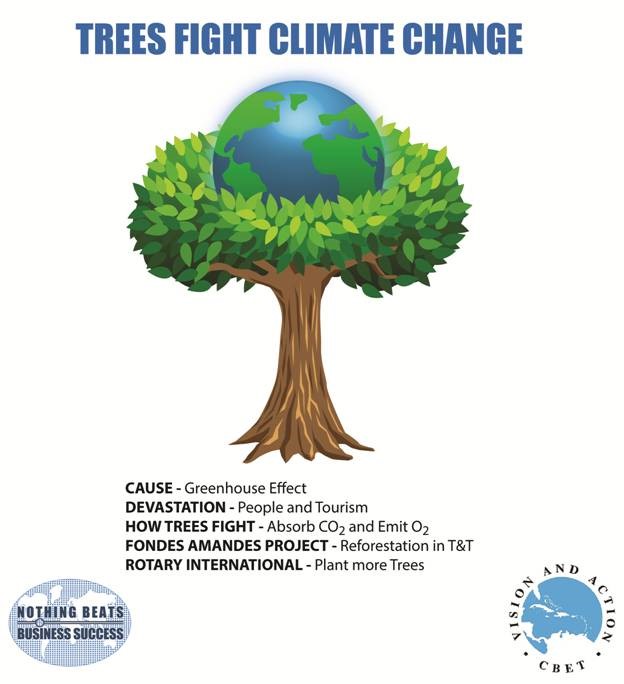 Let us recognize and embrace the importance of trees to the survival of the planet.  If each one of us plants seeds or cuttings in fertile soil under radiant sunlight and beside abundant waters, then God provides the system for them to sprout or grow and alleviates the negative impact of climate change.