“Where there is no vision, the people perish: but he that keepeth the law, happy is he.” – Proverbs 29:18

Last Friday,  in his lifetime, the Grand Salle was renamed to honour Sir Courtney, in a very impressive ceremony held at the Frank Collymore Hall.

As I reflect on my interaction with Sir Courtney Blackman for more than 40 years, I am reminded of the adage “Vision without Action is mere fantasy; Action without Vision is folly; Neither Vision nor Action reeks of irresponsibility; Vision and Action induce synergy”.

As a visionary he realized that a vision alone was not enough and set about to expertly combine his vision with companion actions as a leader, manager, mentor and friend. These actions have resulted in the enhancement of the image of Barbados internationally, the creation of an example to his peers and subordinates and the engagement of the wider community to participate in a holistic way and benefit from the synergies of interaction.

Sir Courtney and I never met while we were at Harrison College, even though we overlapped for a few years during my 10 year stay at secondary school.

The following reflections come to mind:

(1) My first encounter with him was a visit to his office (1977) to ask him to be the guest speaker at the launch of Systems, my management consulting firm. He readily agreed and delivered a very encouraging address as we embarked on a bold pioneering relationship in the Caribbean market space. Thus began a long and lasting mentorship and friendship.

(2) In 1980, on another visit to his office, his two feet were apparently comfortably perched on his desk, but in a position of unstable equilibrium. Suddenly, but not uncharacteristically, he broke out into peals of laughter and ended up on the floor with a loud bang. The laughter continued from his new position of stable equilibrium by which time his secretary, Mrs. Lucille Simmons, rushed into the office and asked me what was I doing with her Governor.  I pleaded innocence and, having been satisfied that he was safe and sound, she left us to continue our conversation.

(3) It was a significant conversation. He proudly mentioned that he was about to send out a request for proposal (RFP) to computerize the Central Bank of Barbados to overseas bidders. I reacted promptly, but politely, asking him “why would you not use local resources?”. He said “what local resources?”. I said “Systems can bid professionally and competitively on such an RFP”. He said “Prove it to me”. The rest is history. We bid and won the contract and delivered it successfully to the point where we recommended Darcy Boyce as the first manager of the Central Bank’s Information Technology department. Systems continued to be the Bank’s first choice IT consultants for many years as they strengthened that department internally to what it is today.

(4) In 1982, Dr. Blackman presented me with a book called “The Systems Approach” by C. West Churchman. This was the first non-technical study of the space-age science that was revolutionizing management and planning in government, business, industry and human problems at that time. It is still relevant today. He drilled into me a quote from that book “There may be economies of scale of production, but no economies of scale of management” which has served me well in my practice as a business consultant over the years.

(5) In 1986, I recognized that the absence of Venture Capital in the Caribbean was the main inhibitor to enterprise development and set off to Boston to learn some more about it. I came back to Barbados all bright eyed and bushy tailed and presented my findings in a workshop to all interested parties. The late Sir Douglas Lynch, CEO of Barbados Shipping and Trading at the time, immediately invited me to make a presentation to his board which resulted in the concept of Intrapreneurship being implemented in his company. Sir Courtney as usual was very response to any innovative opportunity and said that he would put a proposal to the Bank that some of the reserve allocation, which all commercial banks have by law to lodge with the Central Bank, should be allocated to a Venture Capital fund with “Management as Collateral”. The Commercial bank lobby, which may have perceived this initiative as unwelcomed competition, was too strong and Sir Courtney’s vision on this occasion was thwarted. Thirty years later this entrepreneurial development challenge still remains.

(6) In 1993, I started my weekly column and Sir Courtney would often respond when he thought it appropriate so to do.

I could go on reflecting but space does not permit. Suffice it to say that I benefitted significantly from his wise counsel, guidance and friendship over the decades. 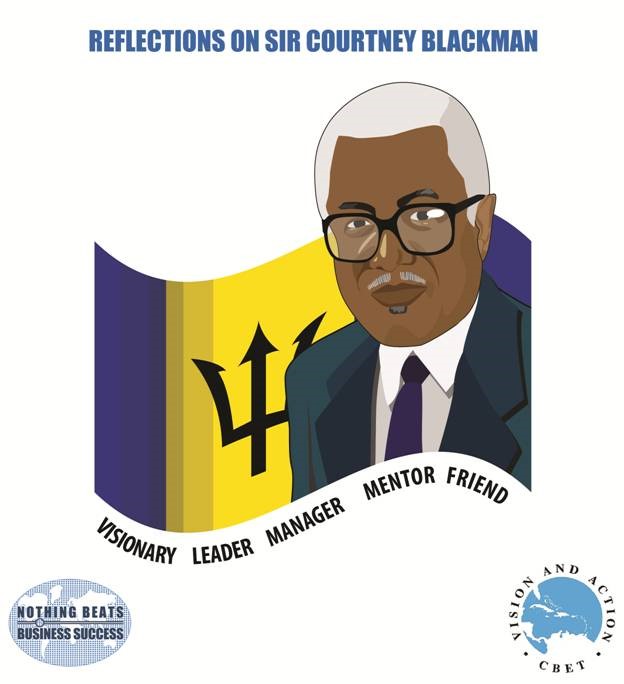 Let us all, who have been blessed to be influenced by Sir Courtney, reflect and recognize the contribution that he and Lady Blackman have made in our lives and let us, in turn, aim to be the best we can be to others.