“To those who use well what they are given, even more will be given and they will have an abundance. But from those who do nothing, even what little they have will be taken away.”

In an article in Automation World (January 2006) entitled “People are your primary assets”, Jim Pinto stated as follows: “Peter Drucker, the great management guru, died (November 2005) peacefully in his sleep at home on Nov. 11 at 95, eight days short of his 96th birthday. For over a half-century he wrote continuously on management and social issues. He originated the view of the corporation not just as a profit-making machine, but as a human community built on trust and respect for its people. He coined the term “knowledge workers”. In his later years his comprehensive articles covered an amazingly wide spectrum of human affairs…In a 1992 article in Harvard Business Review Drucker observed that, while all organizations say routinely that people are their greatest asset, ‘Few practice what they preach, let alone truly believe it’.”

God has given each of us adults in the work force 24 hours a day (at no cost at the point of delivery) and a free will for us to use this resource well to create abundance.  We can spend this 24 hour INPUT in three basic ways: (1) gainful employment (whether as an employee or an entrepreneur) where we generate productive OUTPUT to create wealth in our community; (2) sleep (since we are human beings and not machines) where we continually recharge our batteries to prepare us for the next day; and (3) personal time (education, recreation, nutrition, exercise, relationships, peace of mind and community service) where we feed mind, body and soul and exhibit appreciation for our fellow man.

Productivity is the rate of OUTPUT per unit of INPUT. To a large extent, we individuals in a free society can determine the INPUT (the portion of the 24 hours which we allocate to gainful employment) as human resources. We need to be concerned about maximizing the OUTPUT for a given level of INPUT, i.e. we need to continually increase our productivity level, for fair compensation, if we are going to make an optimal contribution to growth in society.

Governments engage in taxation as a primary source of the revenue required to pay for the central services it is mandated to provide. If there is a shortfall in government revenue, then governments tend to increase taxation. Theoretically this would seem to be a reasonable thing to do. However, in practice, increased taxation means less disposal income for the individual who then becomes demotivated and unhappy resulting in a loss of productivity. 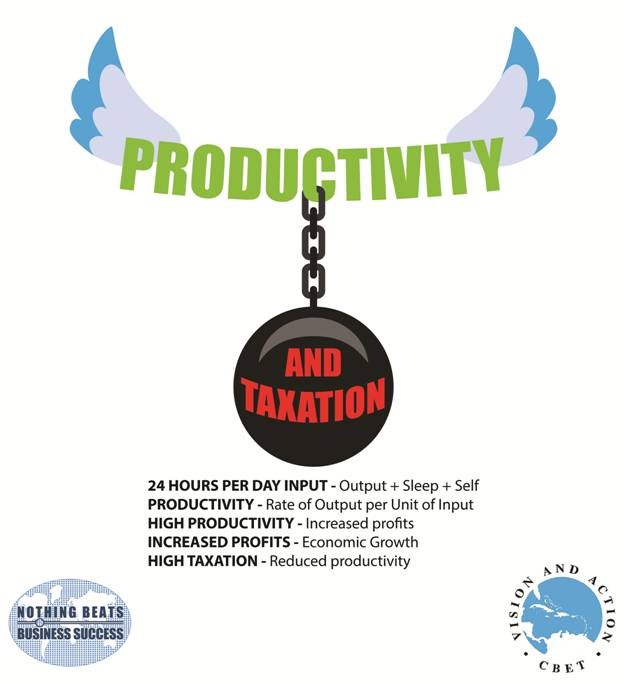 Let us invest some time in aggressively and diligently focusing on the twin concepts of productivity and taxation to arrive at an optimal combination which would maximize the rate of economic growth.