Last week we affirmed that, once we exist, we can do all things in Him that strengthens us and we agreed to strive, conquer and achieve success whether we have a relatively smooth systematic and evolutionary path or whether we have to recover, over rocky ground.

As if Hurricane Harvey in Houston and Hurricane Irma from Barbuda to Florida were not enough, last week another category 5 hurricane, Maria, released its fury on the Caribbean islands of Dominica, St. Croix, Puerto Rico and others leaving total devastation in its path. It is still being fuelled by the warm waters of the western Atlantic. If we add the earthquake damage and loss of life in Mexico, it has been a fortnight we would not care to have repeated in this region of the world.

At a distance, our hearts go out to the survivors, who now have to begin the recovery process to surpass the quality of life to which that had grown accustomed.

Since  St. Thomas, St. John and Water Island in the U.S. Virgin Islands (USVI) were ravaged by Hurricane Irma over two weeks ago (St. Croix was spared), I have been following the daily live news conferences by USVI Governor Kenneth Mapp and his team of Commissioners and Heads of Departments, as well as the subsequent published news releases.

The recovery process which has evolved, which of course now includes St. Croix which did not escape hurricane Maria’s wrath, has been very impressive.

I have attempted to capture this recovery process in what I see as four main recovery steps.

(1) Governor Mapp immediately assumed the position of leader of the recovery process, sought help from the telecommunications carriers to get basic communications systems restored, gave a blow by blow bulletin to the residents as to the fate of the islands, empathized with their suffering and promised help to gradually alleviate the people of the Virgin Islands from the devastating impact of the hurricane.

This first step, the foundation, confidently assured his people that there was a clear vision for a successful future of the islands and that, although it would take time, they would be better off than before and “no one will lose their soul if they stay aboard the ship”.

(2)  Governor Mapp’s  second step, the security, was to mobilize all his department heads (including emergency management, tourism, health, police, army and education) to assess the priority needs which was the basis on which he could seek federal assistance. He motivated those who could begin by helping themselves in whatever small way until help arrived.

(3)  The third step, marketing, was to seek specific assistance and immediately there was a response from the President of the United States as well as Governors of states in the U.S., including New York.  The U.S. Federal Emergency Management Agency acted immediately and they have had a continual presence in the USVI since. Their job, among other things, is to coordinate and distribute emergency food supplies, water and address medical needs. There was an outpouring of assistance from Governments in the Caribbean and the private sectors cooperating in harmony with the Governor’s wishes.

(4)  The fourth step, growth, is to combine the self help and the assistance to benefit from the synergy of smart work. This has been beyond expectation.

Governor Mapp continually motivates his people to maintain the vision of sustainable success notwithstanding the devastation of two hurricanes in less than two weeks.

Other countries in the Caribbean which have suffered a similar fate to the USVI hopefully will have similar leadership and support from the British, Dutch and French and Caribbean governments, NGOS and the private sector to expedite their recovery process. 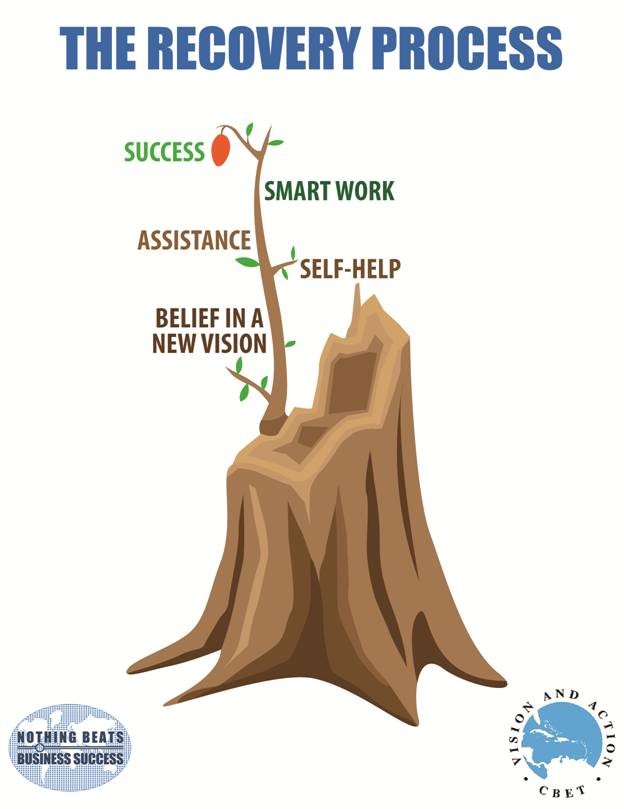 No matter what we face in life, let us focus on a new vision and, with our faith as our foundation, work passionately towards success.

By working together, we will rise again.