“The LORD detests the use of dishonest scales, but he delights in accurate weights.” – Proverbs 11:1

Universal adult suffrage, used exclusively in the political context, is the right to vote in elections of a state.

Prior to the mid-20th Century only wealthy male Caribbean adults were enfranchised and the rest of adults were disenfranchised. This is not to say that the state was badly managed. However, what about the non-wealthy male adults, should they not have the vote? It was in answer to this question that the first state elections held in the Caribbean under adult suffrage, one man one vote, was introduced so that all adults would have a say in those elected to run the affairs of state.

It is my view that the Caricom Heads of Government, collectively, must intervene, as the authentic voices of the people of the Caribbean who patronize West Indies cricket to rid the region of this despicable scourge of imbalance.

Of course, I am not proposing that the Heads of Government run West Indies cricket, that is not the role of a government. Indeed, it may be argued that WICB already, on a day-to-day basis, runs West Indies cricket with a certain high level of efficiency. My main concern is to introduce constructive change to enhance corporate governance so that we strengthen the structure of West Indies cricket for posterity.

What I am proposing is that the Caricom Heads of Government meet with representatives of West Indies cricket stakeholders, including: (1) International Cricket Council; (2) WICB; (3) West Indies cricket Legends; and (4) current squad (managers, selectors, coaches and players) to redress this question of disenfranchisement. 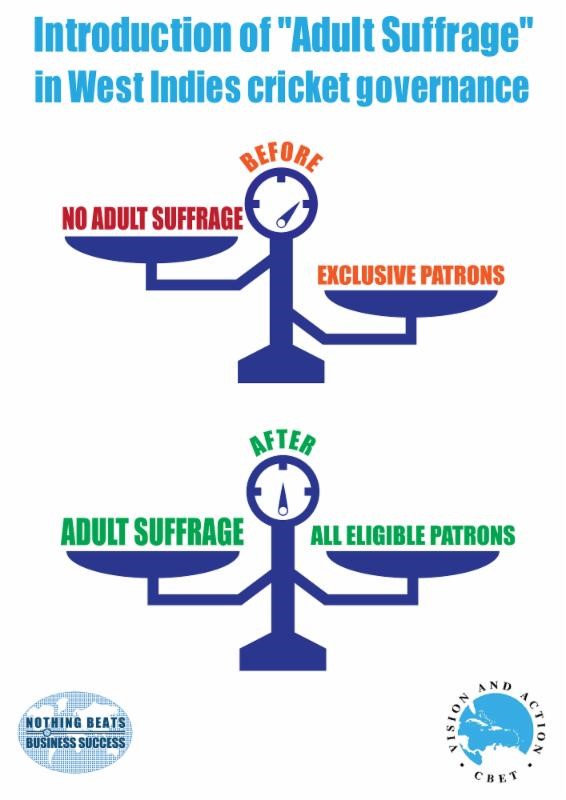 Let us use the weight of adult suffrage to redress the imbalance in the voting rights of eligible patrons of West Indies cricket.